THE FOUNDATION OVERSEES THAT THE CONTEXT IN WHICH THE LEGACY OF THE ARTIST IS USED, DOES NOT OPPOSE GENERALLY ACCEPTED MORAL PRINCIPLES, OR THE IDEAS AND PRINCIPLES ACCORDING TO WHICH THE ARTIST LIVED AND CREATED HIS WORK.

Six hundred millennia after the withdrawal of the Pannonian Sea, a half hour of rowing away from what was once an island of Fruška gora, in 1953, the first and last Pannonian sailor was born. Đorđe Balašević spent his life, or rather two thirds of a century in Novi Sad and in that time managed to write countless lines, some lyrical, some dramatic or novelistic which millions then learnt by heart. In 1977, he began his musical career in the band ‘’Žetva’’, and a year later became a member of the band ‘’Rani mraz’’, only to sail in 1980 into his own musical world, one without the slightest similarity in genre to any that came before it, or any that would come after. He published fifteen albums with songs that become trademarks not only of Đorđe Balašević, but of Novi Sad, Vojvodina, Serbia, and Yugoslavia. He demonstrated his qualities and versatility as an actor as well, appearing in several television series. As he himself said, the stream of words and ideas was destined to find its place outside of a six-minute format, prompting various novels in which Đorđe Balašević testifies of his own life’s journey, in the only way he knew how – wittily, lucidly and poetically. Oftentimes without trying to hide it, he spoke, wrote and sang of his wife Olivera – his greatest love and inspiration, as well as of his daughters Jovana and Jelena, and his son Aleksa. One result of their joint energy and creativity is the film ‘’Kao rani mraz’’ (2010) in which each family member had their own assignment, with Đorđe having three: he was the screenwriter, director, and composer. He was never at a loss for words when it came to his emotions, or his opinions, sharply and persistently opposing social anomalies and all toxic ideologies. The day he left, February 19th 2021, as if by command ‘’So let it pour!’’, a sea of people flooded the streets of cities all over the region! It was the greatest send-off to sea that modern history can remember.

Through the Foundation Balašević, his family, friends, and followers are committed to preserving the legacy of Đorđe Balašević, as a testimony and contribution to the cultural heritage of the Pannonian region for future generations.

The ‘’FOUNDATION BALAŠEVIĆ’’, from Novi Sad, with a head office located at the address Jovana Cvijića Street, no. 33 (hereinafter: ‘’the Foundation’’) is an independent, non-profit legal entity founded by the family of the late artist, poet, and singer-songwriter Đorđe Balašević (hereinafter: ‘’the Artist’’) for the purpose of protecting the personal name, piety and overall creative works of the Artist. The heirs of the Artist, i.e. the founders of the Foundation in question have conceded all copyright and related rights whose holder was the Artist, to the Foundation.

The Foundation is authorized to directly negotiate with all interested natural and legal persons on the matter of giving consent for any kind of use of the personal name, image or overall copyright works of the Artist. During negotiations, the Foundation may set different conditions of use for different interested parties, i.e. the conditions of use will be determined in each specific case.

Finally, the Foundation oversees that the context in which the legacy of the Artist is used, does not oppose generally accepted moral principles, or the ideas and principles according to which the artist lived and created his work. 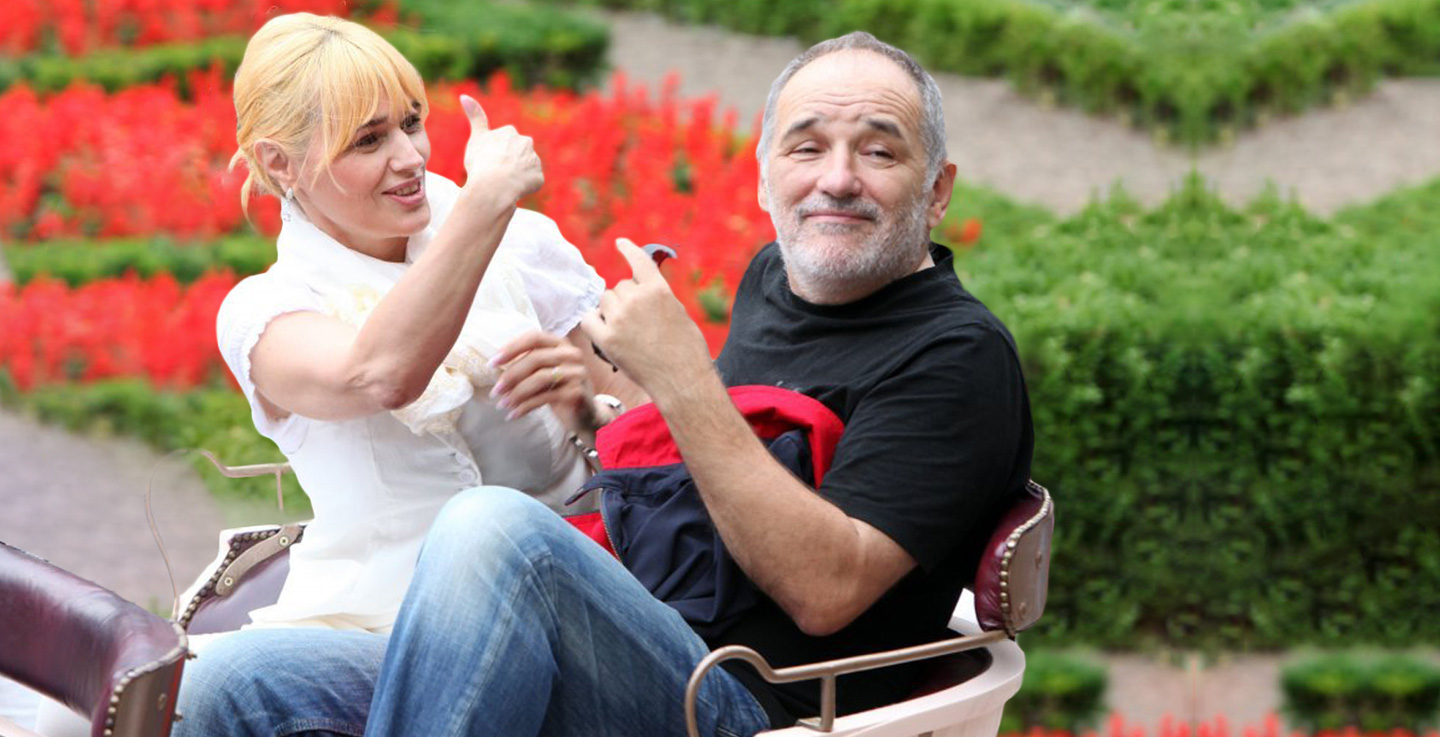 CONDITIONS OF USE OF THE COPYRIGHT WORK, IMAGE AND NAME OF ĐORĐE BALAŠEVIĆ 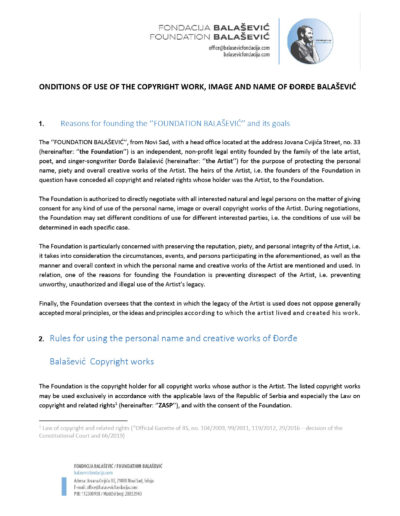 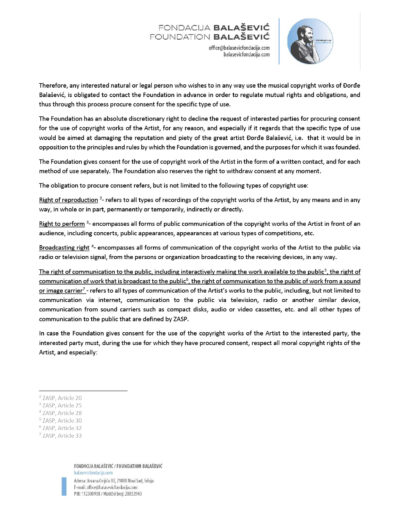 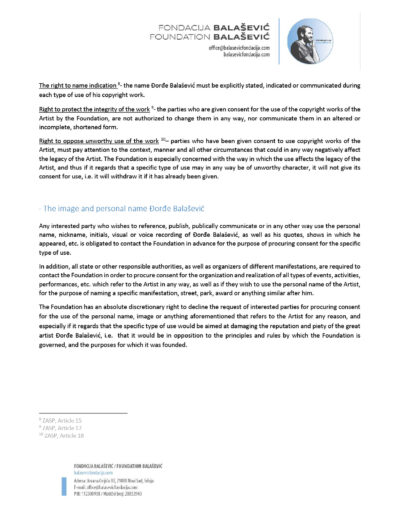 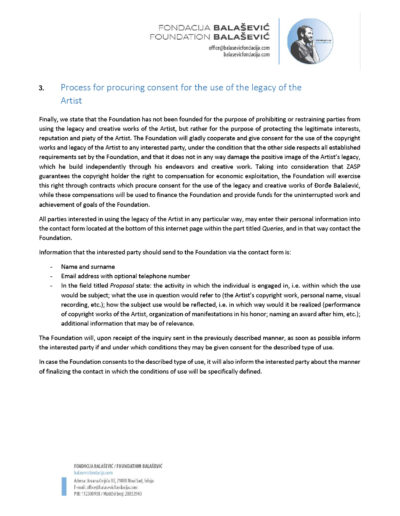 INFORMATION ABOUT THE FOUNDATION BALAŠEVIĆ